Another common symptom that requires Turbocharger Problem Solving, is lack of boost.
Low boost can also indicate general wear in a turbo. This especially, if it’s a variable vane turbo(VNT), and the exciter ring that controls the vanes that help provide boost is worn. 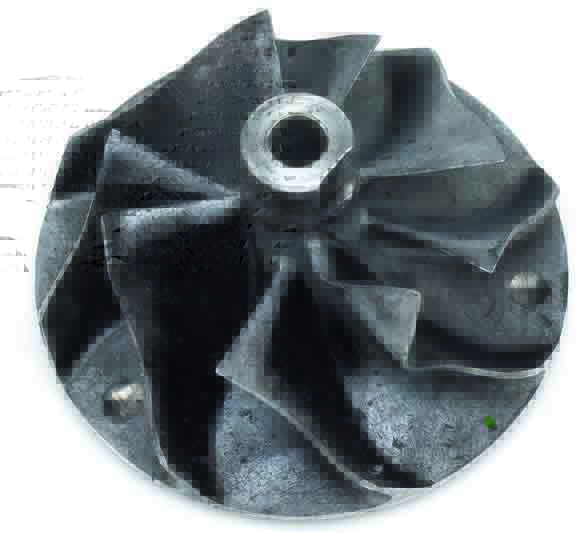 Other reasons for low boost, include vacuum or wastegate problems.
A stuck wastegate will not allow pressure to build as the turbo tries to spool up.
A malfunctioning actuator will likewise create boost, error code and ‘limp mode’ problems.

If your turbo has an electric actuator, you can find more about these Turbocharger Stepper Motor faults here.

Do you have a ‘squealing’ noise associated with a lack of boost?
There could be air pressure issues due to air or gas leakage.
And ‘squealing’ is air escaping under pressure around hose seals, flange and gasket surfaces, or splits in vacuum pipes.

Excess smoke may not be related to a turbo issue, but may indicate general engine wear and tear (especially piston rings / cylinders).
But smoke will be a blue-ish colour, as the oil burnt in the engine is blown out the exhaust.

A grey-ish colour can indicate oil being pushed out of ‘seals’ in the turbo, and heating via the exhaust system on the way out.
Both conditions are usually confirmed by excess oil use, and the need to top up the engine sump for lost oil.
Once again, under such conditions, if it’s an old turbo, it is highly recommended to replace the turbo.

However, if the turbo is a new install, or not old enough to be worn, then please read on.

Of the many problems encountered with turbochargers, oil leaks are relatively common.
Often the problem is not in the turbo itself, but rather a peripheral maintenance or turbo installation issue.
Oil may be seen inside the turbocharger, the compressor or turbine – on either side of these respective housing ‘seals’.

It’s important to note: The ‘seals’ function foremost to prevent pressurized vapor from entering the engine crankcase due to turbo operation.
Only secondarily, do these seals act to prevent oil escaping the centre housing (CHRA), and into either the compressor or turbine side of the turbo.

If oil is leaking then it may be entering either side; compressor (cold) or turbine (hot).

A change in pressure due to air restriction or air leakage, can draw oil via vacuum into the compressor housing. Restriction may increase over time if a dirty air filter is not changed regularly.
A more common cause is blockages or incorrect pressures in the Turbocharger oil feed or oil drain lines. Excess inbound oil pressure or back pressure, causes oil to breach the seals on the compressor side of the housing.
This can force oil through the inter-cooler (if installed) and cylinder head.

Oil leaks on the turbine side are more obvious, as oil leaving the turbine will heat in the exhaust system. Heated oil produces excessive smoke at the tailpipe, sometimes seen as a grey-ish colour.
It is often mis-diagnosed as a ‘seal’ problem in the turbocharger.
But you must remember that turbo ‘seals’ are there to primarily hold vapor. And oil is kept in the right place when oil/gas/air pressures in the turbochargers systems are correct.

Pressures in the turbocharger can be affected by wear in the engine such as rings or cylinders. And more commonly, blocked oil drainage pipe or blocked oil sump ventilation / crankcase breather.
In the case of blocked drainage or sump ventilation, the fault may be due to internally damaged or kinked drain lines. Also possibly via pressure build up in the crank case due to poor ventilation or an over-filled oil sump.