Because of the increase in compression ratios of modern (especially Diesel) vehicles, Catch Cans are becoming more relevant.
They are no longer just for older, tired motors.
Higher compression, like wear in an older motor, increases the possibility of blow-by.
Chip modifications that create more power, or if you just drive hard, often, likewise increase this unwanted side-effect.

Gases ‘blow-by’ piston seals, enter the crankcase and are expelled through an engine ‘breather’ system to prevent pressure in the crankcase (crankcase pressure makes piston movement less efficient).
This breather system re-circulates the vented gas back into the induction system (rather than release into the open air which is problematic for pressure equalization and the environment!).
Or via PCV valve that is often connected to the throttle-body (on engines that have one), venting at idle or in large, short bursts when you quickly lift your foot off the ‘go’ peddle

We will focus on the ‘breather system’ as it is more relevant in diesel / turbocharged engines.

The problems associated with blow-by include:

Incorrect boost sensor readings can cause wastegate malfunction and hence over-boost.
Fouled pressure and MAF sensors mislead the ECU, leading to incorrect combustion, lower performance and at worst, engine damage.
Incorrect combustion leads to a plethora of issues, much of which stem from excess ‘coking’ or carbonization and resulting blockages of conduits or jamming of moving components.

Less power is produced and clogging of injectors and plugs on the way in occurs.
And excess carbonization in exhaust occurs on the way out.

The Oil Catch Can Remedy

The Oil Catch Can plays a simple role as a remedy to the above issues.
It acts as a filtration system between the engine ventilation system and the intake system.
Oil-laden gasses are released through the ‘breather’ into the can where vapors are separated, with oil settling to the bottom of the can and ‘air’ passed back into the induction system.
You could also use the can to ‘monitor’ the amount of oil being passed around through this system.
Monitoring excess oil collection can provide an early indicator that may prevent a jammed nozzle ring in an excessively carbonized turbo turbine or an oil-soaked inter-cooler that needs replacing or flushing.

The Catch Can is installed in-line between the engine ‘breather’ and the air intake system.
In a turbocharged system, the released air from the oil catch can will mix with fresh air from the air filter and enter the turbo for compression by the impellor wheel. 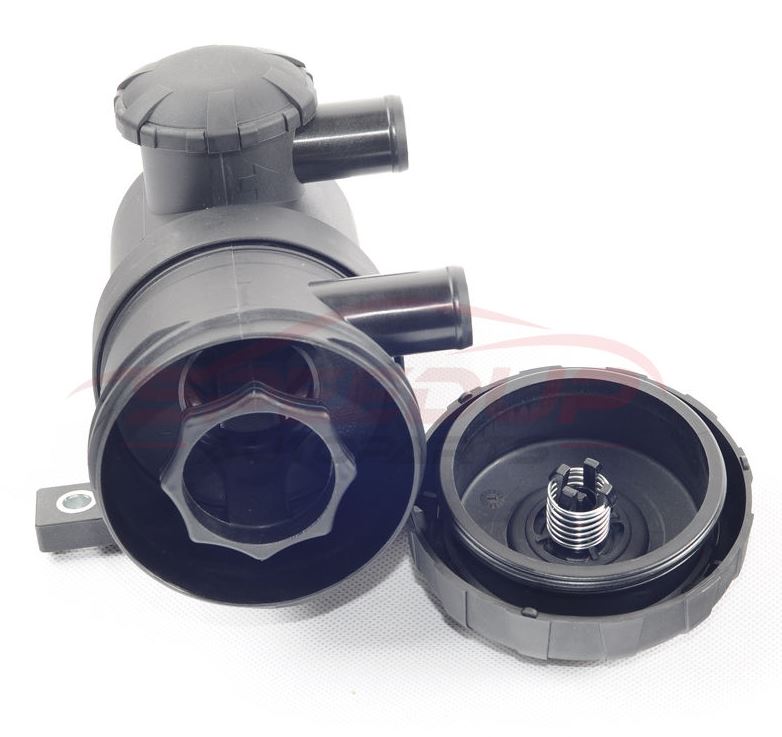 Where we recommend using The Oil Catch Can Remedy:

Outside those applications above, for such a small price and easy installation, an Oil Catch Can could still be considered a good investment on most vehicles, especially turbocharged vehicles.
Most turbocharger problems occur because of oil contamination.
Anything that helps keep the oil clean and flowing will ultimately help keep a turbocharger healthy.

In turbocharged applications, you will need to choose a pressure-sealed catch can to prevent boost-leak.
You will also find that larger openings provide better flow in and out of the Oil Catch Can.

All Catch Cans are different, ranging from the ones that are just an empty can (ineffective) to those with pressure and vacuum valves and easy-to-access removable / cleanable / replaceable media.

We supply a couple of UNIVERSAL FIT Oil Catch Cans.

Installation is a breeze, and we cover our Oil Catch Cans with a 24 month warranty.

You can find our cost-effective Universal Oil Catch Cans here!.

If you have any other query on matching parts for your vehicle, please feel free to contact our sales support on: 0490 059 316.